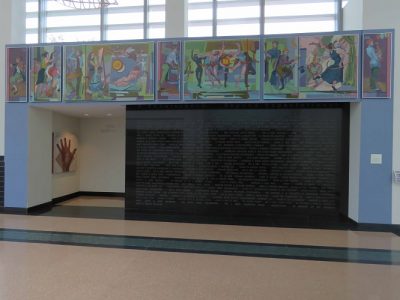 This mural, commissioned to celebrate the Fine Arts Center’s 75th anniversary in 2012, was painted by Eric Bransby who was assisted by Trevor Thomas. Since 1936, mural art has been an integral part of the FAC experience. There are murals by some of this region’s most renowned historic artists on the FAC’s original building’s facade, in the cafe, lower level lounge, and courtyard. Eric Bransby’s sprawling mural honors this integration of painting and architecture by extending the mural tradition into the FAC’s new wing.

In the mural, Bransby depicts aspects of the visual arts, performing arts, and art education that comprise the FAC’s institutional identity. Included are significant figures from the FAC’s illustrious history, such as artist/educators Boardman Robinson and Lawrence Barett, and modern dancer Martha Graham. A more detailed description is available from the FAC. (Source: FAC brochure)