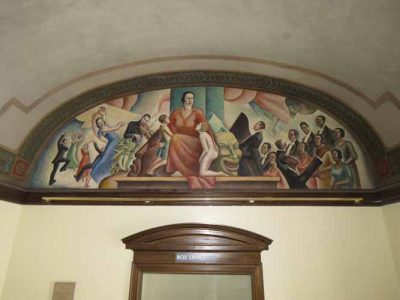 This WPA mural on the west wall in the City Auditorium foyer was painted in 1934 by Tabor Utley. It was funded by the Public Works of Art Project (PWAP), one of many federal government programs often referred to as Depression Era WPA programs. The goal of the PWAP was to furnish work for unemployed artists in the decoration of public buildings and parks. Artists were selected on the basis of their need for employment plus their professional ability. At the time, Utley was an instructor at the Broadmoor Art Academy. “Tabor’s representation of ‘The Arts’ conjures up not only General Palmer’s vision for a civilized haven at the foot of Pike’s Peak, but a more universal social and cultural world than that of 1930’s Colorado Springs. The central figures probably represent the Muse, Youth and Innocence. Other sections show various performing arts, including … a gospel choir.” (Source: “The Murals of Colorado: Walls that Speak” and “History of the New Deal Art Projects”)