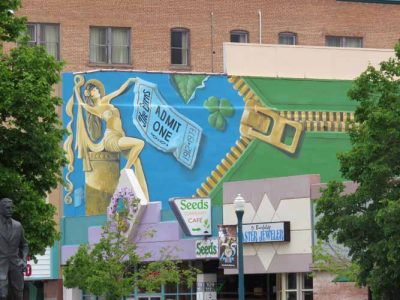 Homage to the Burns Theater

This mural was painted in 2010 by Kim Polomka and funded by the owner of the building and arts supporter Chuck Murphy and includes a shamrock, his personal good luck symbol. The Burns Theater, located a block to the west, was built with Cripple Creek gold money in 1912. It seated 1,500 patrons who enjoyed opera and theater performances. The figure on the left is a replica of one of two “muses” from a 1925 theater playbill. The ticket represents both the Kimball’s movie theater (the building on which the mural is painted) as well as the Burns Theater. The zipper in intended to symbolize Colorado Springs opening up to new vision of the future. The building became a move theater in 1928 and was torn down in 1973.

For more information about the history of the theater see “Saga of the Burns”, http://krccnetwork.org/tbs/KivaBurns6.pdf KRCC Archives. See below for historic photos of the playbill and the theater. (Source: conversation with the artist Kim Polomka, photos courtesy of the Pikes Peak Library District Special Collections and Colorado College Tutt Library Special Collections)