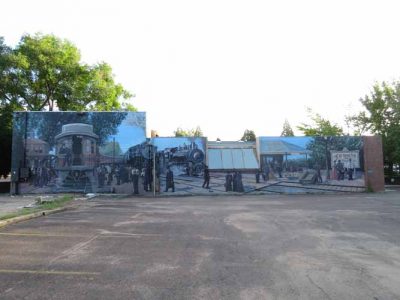 This mural was painted in 2009 by Douglas Rouse. The property owner received grant funds from the Colorado Springs Downtown Development Authority (DDA) as part of the 2009 DDA’s Challenge Grant program, which the owner matched and exceeded for purposes of launching and completing the creative mural project, thus enhancing and adding to the vibrancy of Downtown Colorado Springs.

The title of the mural refers to the “Pfalsgraf vs. Long Island Railroad” precedent setting 1928 New York Court of Appeals legal case that established proximate cause as a limitation of negligence with respect to the scope of liability in tort law. The mural depicts the main elements of the case. A passenger was being helped onto a train by a railroad employee (see the left of the mural.) The passenger dropped his package, which exploded when it hit the ground. The shock knocked down, or caused a startled bystander to knock down, a scale at the end of the platform (see the right side of the mural) which injured the plaintiff. The court ruled that there was not sufficient connection between the act of the railroad employee and the plaintiff and established the concept of “foreseeability” in tort law to limit liability. The choice of the subject is especially relevant since the property owner was an attorney and the historic Colorado Train station, not the “”Depot Events Center”” is nearby. See below for additional photos. (Source: Wikipedia)