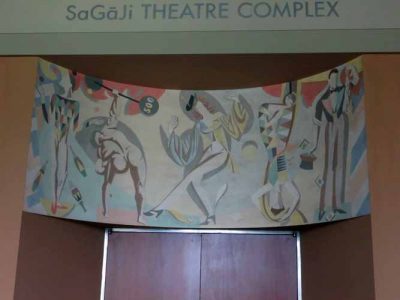 Andrew Dasburg, a Taos artist, painted this mural on the Fine Arts Center Theater Lounge east wall during 1936 and 1937. Dasburg was suffering from Addison’s disease which delayed the completion of this mural. “The performers include a juggler with Indian clubs; a weight lifter with barbells; a woman in hat and gown dancing on musical notes; an acrobat standing on her head; and a magician with rabbit, top hat, and playing cards.” All effortlessly perform with grace and drama, setting the mood for performances in the theatre. This mural uses a flat Art Deco style; it was painted on canvas which was then glued to the wall. (Source: “Discussing Murals”, an FAC internal publication”)