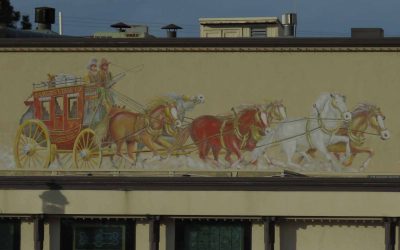 This 11’ x 37’ mural of the mythic Fargo Stage Company coach, operated by Gardner Bros. and pulled by a team of six horses, was painted on the front wall of Fargo’s Pizza in 1997 by John McCoy and Dave Meredith. In 1973 Two brothers, Leon and Landon Gardner, created and western themed pizza restaurant seating 500 customers. In 1997 Leon asked John McCoy, who had been doing painting inside the restaurant, to create a large mural of a stagecoach on the front of the building. John enlisted Dave’s help and the two created a design in the style of Charles Russel, the famous western painter, for a stagecoach pulled by six horses. The driver on left is an image of Leon Gardner and on the right is Leon’s younger brother Landon. John and Dave painted the mural in three days. Then, also in 1997, Dave completed a 2’ x 6’ painting of the mural that hangs above the restaurant bar.

While planning the building, Leon and his architect created the legend of Fargo and Sophia to enhance the old-west ambiance of the restaurant. In their legend, “Fargo”, a former gold miner, and his wife “Sophia”, a European heiress, lived in Colorado in the 1850-1890’s. After surviving “hard times”, they created a successful western restaurant. Fargo and Sophia can still be seen seated in the balcony overlooking all the activities below, although to the less imaginative they may appear to be only mannequins dressed in period costume. See below for mural details, Fargo and Sophia, and Dave’s painting of the outside mural. (Source: conversation with the artist, restaurant staff and Nov. 1985 “Pizza Today” titled “Fargo’s”)