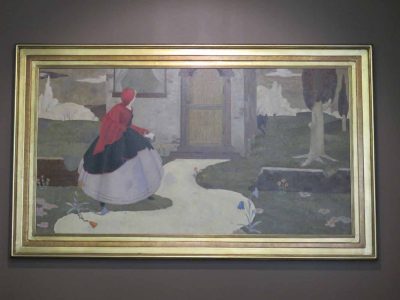 This oil on canvas mural was painted in 1929 by Leone C. Bradbury and depicts Little Red Riding Hood. The dedication plaque for this mural reads:

“Little Red Riding Hood” is a European fairy tale about a young girl and a Big Bad Wolf. Its origins can be traced back to the 10th century by several folk tales of various European countries, including “The False Grandmother.” The story has been changed considerably in various retellings and subjected to numerous adaptations, with one of the most famous by the Brothers Grimm.

“Little Red Riding Hood” is one of a set of nine murals painted in 1929 for the newly constructed Ellsworth Elementary School in Denver, Colorado. The entire set is now collectively titled “Flights of Fancy.” The murals were wheat pasted to the walls of the kindergarten room and black borders were painted onto the wall around the edge of the canvas. The murals were commissioned by the building’s architect as part of construction costs. During that era commissioning art, especially murals, for school buildings in Denver Public Schools District No 1 (DPS) was considered to be an important and standard practice.