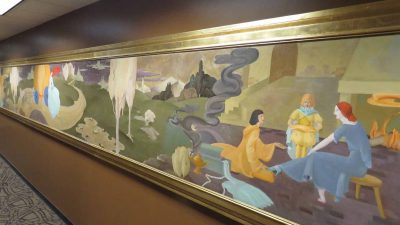 This 28’ long oil on canvas mural was painted in 1929 by Leone C. Bradbury and depicts three scenes from the Cinderella story. The dedication plaque for this mural reads:

There are thousands of variations of Cinderella and the Little Glass Slipper. The story of Rhodopis, about a Greek slave girl who marries the King of Egypt, is considered the earliest known “variant” of the Cinderella story. It was published in 7 B.C.

“Cinderella” is one of a set of nine murals painted in 1929 for the newly constructed Ellsworth Elementary School in Denver, Colorado. The entire set is now collectively titled “”Flights of Fancy.” The murals were wheat pasted to the walls of the kindergarten room and black borders were painted onto the wall around the edge of the canvas. The murals were commissioned by the building’s architect as part of construction costs. During that era commissioning art, especially murals, for school buildings in Denver Public Schools District No 1 (DPS) was considered to be an important and standard practice.

The photo below was taken in 1995 at the start of the conservation process when all nine murals were removed from Ellsworth Elementary school. The holes in the canvas were made to create openings for a school bell and a clock. (Source: Denver Post newspaper articles, Yale University Archives, Denver University Archives, Denver Art Museum archives, Hays Shoop – conservator with the Western Center for the Conservation of Fine Arts, Denver Public Library, and Centennial Hall dedication plaque)