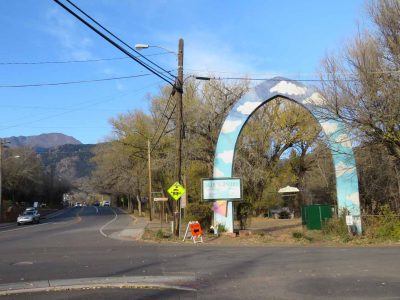 This mural of blue sky and white cumulus clouds on the entrance arch to the Blue Skies Inn in Manitou Springs was designed by Sally Thurston who hired sign painter David Meredith to paint it from her sketch in 2001.

Sally Thurston is an artist and photographer descended from Colorado pioneers. Thurston purchased the property in 1996 and wanted to enhance the previously brown colored steel plate arch built in the 1980’s to better reflect the name of her lodging business for which she was the licensed contractor.

After the mural was completed, a number of persons objected to it, and the city council passed a mural ordinance for Manitou Springs limiting the content of murals that can be created without City approval. Thurston has decorated the Blue Skies Inn cottages with her own hand painted tile mosaics and has hand painted different decorations in each suite. See below for photos of her interior artwork. (Source: conversation with the business owner/designer)