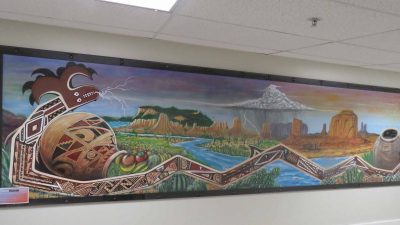 “This mural began as a sister cities project to celebrate the relationship with Nuevo Casas Grandes our sister city in Mexico. Nuevo Casas Grandes is home to the ancient Paquime Pueblo Indian ruins, a very large area where a sophisticated city of thousands of multi-story houses once stood. ‘Casas Grandes’ in Spanish means ‘Big Houses,’ and the present-day city is called Nuevo Casas Grandes or ‘New Big Houses,’ because of the proximity of the old big houses. Paquime is also known for the many beautiful ceramic pots found in the ruins which have inspired a thriving modern pottery industry in that area of Chihuahua State. This is reflected in the mural. The mural also depicts a river which flows past the ruins, the Feathered Serpent Quetzalcoatl who symbolizes the union between the earth and the sky, and the Spanish Mission Church established by the Franciscan Friars representing a mixture of European and indigenous motifs.
Colorado Springs artist Roberto Rodriguez generously agreed to complete the unfinished mural when the Mexican artists returned to Nuevo Casas Grandes. The mural as seen now is mainly his creation.”