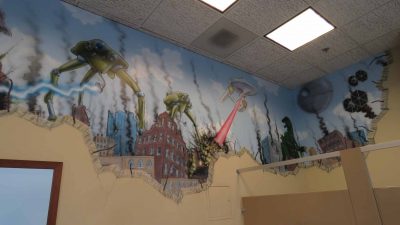 These imaginary depictions of scenes from the H.G. Wells novel “War of the Worlds” (1898) were painted in 2010 by James Wolnick on the walls of the men’s restroom of the south tower of the Plaza of the Rockies. In the story, creatures from Mars invade the planet earth. The radio drama adaptation, directed and narrated by Orson Welles (1938), became famous for allegedly causing mass panic.