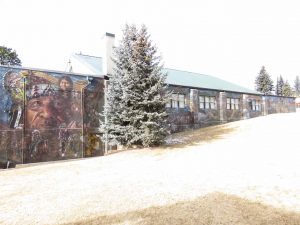 This 145’ long mural, on the west side of the Ute Pass Cultural Center in Woodland Park, was painted in 2015 by Lois Sprague to celebrate the history of Ute Pass through the 1960’s. Most of the individuals in the mural are likenesses of actual people. The mural moves through time left to right. It begins with depictions of Ute Indians, and then pioneers in wagons, coming up Ute Pass. The most prominent face is that of Roland McCook, Chief Ouray’s second great grandson. In the upper right is a likeness of Ouray’s wife Chipeta. All the other Ute Indians in this portion of the mural are likenesses living Ute Indians. The word NUCHEW, on the scroll in the upper left, is a Ute word meaning the “Ute people, we are all one.”

The center section of the mural celebrates the Wildflower Train Excursions from Colorado Springs to the Ute Pass area, with stops in Green Mountain Falls, Woodland Park, Lake George, Eleven Mile Canon and Cripple Creek. These excursions were very popular from 1910 to 1949. Many local persons are depicted in this section of the mural. The train conductor is Ralph Holloway who was instrumental in organizing the mural project. The engineer portrays Fred Zobel another local supporter of the mural project. The artist’s husband, five children and son-in-law are included in this portion of the mural. The church is a depiction from a photo of an actual 1886 funeral at the original Methodist church in Woodland Park. The minister, in a long coat at the right of that scene, is the likeness one of the actual ministers of that church who is the second great grandfather of a local Woodland Park resident.

Next, the mural celebrates the annual Ute Pass Rodeo and its rodeo queens shown sitting on a split rail fence. On the left is a depiction of Merry Jo Larson, a second generation owner of the Cowhand western wear store, who grew up in Woodland Park and was Rodeo Queen in 1966. The other two women sitting on the fence are likenesses of the artist’s mother and mother-in-law. On the far right Bert Berkstrom, riding his horse Buck, is depicted leading the rodeo parade, as he usually did, carrying an American flag. The hay wagon with horses pulling it is from Paradise Ranch. The Woodland Park Arts Alliance raised the funds to create this mural in part by selling chances to be depicted in the mural. (Source: conversation with the artist and the Ute Pass Historical Society)