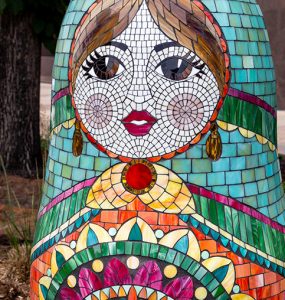 Chipeta-Mai, by Kasia Polkowska & Kyle Cunniff, is a cross-cultural matryoshka doll. Historically, the first matryoshka doll was made in Russia and has since become a symbol of the Eastern European culture where Polkowska was born. To give her a sense of place, she was named to honor the people whose ancestral land we inhabit, focusing on Colorado where the artist team lives. Chipeta was a famous Ute woman known for diplomacy while Mai (Navajo for ‘bright flower’) was added to the end of her name for the flower she bears on her belly as many traditional matryoshkas do. The warm southwestern colors of the doll further reflect the state where she was realized. This doll is a modern artifact emulating the artists’ interest in the landscape they inhabit as well as the people that roamed that land long before them.