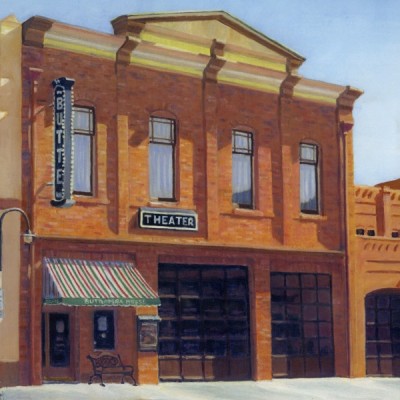 Back in the 1890s, a gold rush of major proportions was underway in Cripple Creek and the boomtown atmosphere called for entertainment. While many tired, thirsty, and socially hungry miners preferred the gambling halls, saloons, and dance halls that lined the streets of the small communities around the mining district there was also a more sophisticated lot who yearned for aspects of the society they left back East…Theatre, Opera, Ballet…The Arts.

Grand opera houses were located in both Cripple Creek and Victor. Back in those days patrons saw the likes of such notables as Texas Guinan and Lily Langtree. After many years of successful theatre in the region, two World Wars and The Great Depression of the early 1900s took their toll on the Arts in Cripple Creek and by the mid-1940s there was no theatre to be found in the little city.

In 1946 Wayne and Dorothy Mackin brought theater back to Cripple Creek when they purchased the Imperial Hotel and began producing Classic Victorian Melodrama. The Imperial Players performed in Gold Bar Room Theater of the old hotel and helped revitalize the town with a new tourism economy. The award-winning theater venue (called by Time Magazine “The Old Vic of Classic Victorian Melodrama”) was visited by such notables as Victor Borge, Arthur Godfrey, Walt Disney, Mary Tyler Moore and Lowell Thomas. It also kick-started the career of Ragtime pianist Max Morath who got his start at the keyboard in the Imperial.

Wayne & Dorothy Mackin continued producing melodrama in Cripple Creek as The Imperial Players for over 45 years before passing the melodrama torch to their son Steve & his wife Bonnie. The next generation of Mackins, after being key figures in the restoration of the The Butte Theater, made The Butte the home to the renewed tradition of classic Cripple Creek melodrama with their Cripple Creek Players taking the stage during summer months.

In 2007 the current chapter of theater in Cripple Creek began when the City of Cripple Creek renamed the facility the Butte Theater and contracted Thin Air Theatre Company (TATC), founded by three former Imperial and/or Cripple Creek Players (Chris Armbrister, Mickey Burdick and Mel Moser) to produce professional theater. Actors, directors, writers and producers – the three friends turned business partners eagerly attacked the challenges presented to them by the City of Cripple Creek of expanding professional theatre in the Pikes Peak Region. TATC, now in its eighth year, has not only continued the rich tradition of Classic Victorian Melodrama but also brought to The Butte stage professional productions of Shakespeare, Neil Simon, mysteries and musicals, as well as contributed their blood, sweat & tears to many community based arts organizations & events.