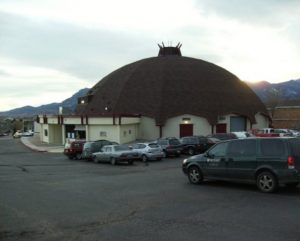 The wonderful and unique dome building now known as Stargazers Theatre and Event Center was originally built in 1969 as a United Artist Cinema 150 Cinerama Theater. Designed by the fascinating architect, Vincent G. Rainey, Stargazers is one of the few remaining examples of his work of that time period. Another example of Mr. Raney’s work that still exists is the dome shaped Cinerama Theatre on Hollywood Boulevard in Hollywood, California.

The theatre was renovated by the Hooton family in 2008, during the course of which every interior inch was polished, painted, cleaned and improved. Along with the cosmetic changes, many improvements were made to the infrastructure of the dome as well: new heating and air conditioning, a fire prevention sprinkler system and all new electrical and plumbing systems. The renovation was a lengthy and involved project with the size and the unique dome design proving to make the job a challenge for every trade. “At times it felt like an archeological dig”, says co-owner, Cindy Hooton, “we worked every day to uncover the beauty and the potential that we knew was there.”

Since it’s re-opening in February 2009, Stargazers Theatre and Event Center has hosted hundreds of live music concerts, film screenings and a wide variety of other stage performances as well as corporate business seminars and trainings. Stargazer’s has also become a favorite spot for community wide events and fundraising events for non-profit organizations and public political events.

Stargazers is committed to showcasing local, regional and national talent. Co-owner John Hooton states: “There is so much amazing talent right here in the Pikes Peak region, ranging from the emerging artist to world class entertainers. Our goal is to create the opportunity for them to showcase their talents on the Stargazers stage.”

Along with the performance arts, there is room in the Stargazers foyer to display the talents of the visual artists in the area. In the past several years, almost a hundred local artists have had the opportunity to display and sell their work to appreciative Stargazers guests.