CANCELED: 'Annie Get Your Gun' 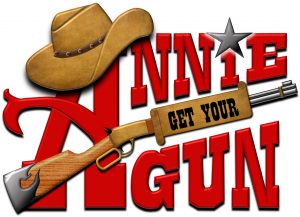 This event has been canceled.

The members of Sunrise Players will present the musical “Annie Get Your Gun” March 26-29 at Sunrise Church.

“Annie Get Your Gun”, is the story of a poor, but a spirited and happy, country girl who lives by her native sharp-shooting skill which quickly makes her the star of Buffalo Bill’s Wild West Show.

This musical has been a Broadway musical hit since it first appeared in 1946 with Ethel Merman where it ran for 1,147 performances and went on to be a four-year hit in London.

Later, Betty Hutton and more recently Bernadette Peter starred in this show with lyrics and music by the great Irving Berlin. Songs that became hits include “There’s No Business Like Show Business”, “Doin’ What Comes Natur’lly”, “You Can’t Get a Man with a Gun”, “They Say It’s Wonderful”, and “Anything You Can Do (I Can Do Better).”