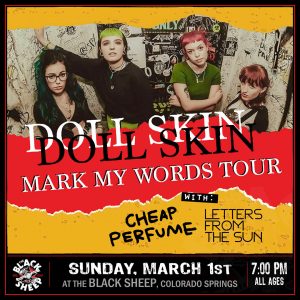 Join us for Doll Skin with Cheap Perfume and Letters From The Sun at The Black Sheep!

From the Colorado Springs Independent:

“It would be presumptuous to claim Doll Skin are the coolest band to ever come out of a School of Rock program, because who really knows? But they are definitely the only one to be ranked among Phoenix New Times’ “10 Best Bands and Musicians in Phoenix Under the Age of 21.”

As you might guess from their band name and most recent album title Love Is Dead and We Killed Her, Doll Skin have a bratty punk-pop sensibility, one that’s earned comparisons to past teenage girl groups like The Runaways and The Donnas.

But they also have a darker, more introspective side, for which they can blame lyricist Meghan Herring.

“I’m the one that cries the most,” she told the Indy in the wake of their 2017 debut album Manic Pixie Dream Girl. “The girls are like, I have feelings too! Just, you know, not a lot of them.”