Chris Alvarez grew up in the small town of Silver City, New Mexico between alpine forests and the southwest desert where his artistic eye thrived in the magical light of the environment. His work is well known in the region for it’s romantic depictions of “ordinary” scenery.

Inspired by his cousin, he began drawing at an early age. Instead of following his artistic passions, Chris took the path most traveled – and recommended by well-intentioned non-artist types – to pursue work that would keep art making his “side-gig” for nearly two decades.

He experimented and found some success in bartending. In an effort to “get his act together” he joined the US Army where he worked as an ophthalmic assistant. Following his time in the Army he worked with at-risk youth in various settings. His teaching skills developed and his knowledge of life grew, but art never stopped calling him.

In 1998, Chris enrolled at University of Colorado, Colorado Springs (UCCS) where he earned a BS in Fine Art and graduated in 2001 with distinction. He began his teaching career in 2002. 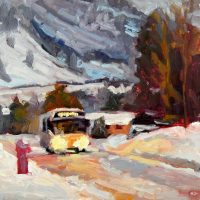