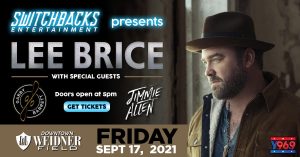 When current CMA and CMT Music Award-nominated and Curb Records recording artist, Lee Brice, isn’t selling out arenas, writing and recording songs, or building new brands like American Born whiskey, you’ll find the family man with his wife Sara, two young boys, and daughter. Meanwhile, with over 2.2 billion on-demand streams, and three billion spins on Pandora, Brice continues to enjoy massive success at country radio, digital streaming service and on the road. He is currently #1 at Country Radio with his fastest rising single career to date, “One of Them Girls,” which follows his #1 with Carly Pearce on “I Hope You’re Happy Now” and his #1 just prior to that, “Rumor,” which was nominated in the category Single of The Year at the 55th Annual ACM Awards. One of the most-played country artists of all time on Pandora, he is a member of the company’s “Billionaires Club,” becoming only the second country artist behind Keith Urban to receive the Pandora Billionaire plaque. Lee is also a GRAMMY nominee, a CMA and ACM award winner, and he’s taken eight radio singles to Number One: “A Woman Like You,” “Hard to Love,” “I Drive Your Truck,” “I Don’t Dance,” “Drinking Class,” “Rumor,” “I Hope You’re Happy Now, and “One Of Them Girls.” Garth Brooks, Jason Aldean, Kenny Chesney and others have recorded his songs, and he’s performed on numerous TV shows, including NBC’s Today, ABC’s The Bachelor, NBC’s The Voice and FOX’s Miss USA 2018. Lee performed as part of the Library of Congress Gershwin Prize for Popular Song honoring Garth Brooks, aired on PBS March of 2020.

Warner Music Nashville’s Gabby Barrett is setting the trend. Recently crowned the ACM New Female Artist of the Year, Barrett scored previous CMA, CMT and American Music Awards nods, was named Billboard’s Top New Country Artist of 2020, an Amazon Music Breakthrough artist, included in Variety’s 2020 Young Hollywood Impact Report, and one of Forbes’ 30 Under 30 in Music, proving why she’s “the face of Gen-Z Country” (HITS). Her meteoric 5X PLATINUM debut “I Hope” was the most-streamed Country song of 2020, highlighted as one of the Best Songs of the year by the Associated Press and Billboard, and winning CMT’s 2020 Breakthrough Video of the Year award, simultaneously cracking the Top 3 on Billboard‘s all genre Hot 100 chart. Reigning atop the Billboard Hot Country Songs chart for a record-breaking 27 weeks, “I Hope” was also the first debut single by a solo female artist to top the Country radio charts since 2017 and made her the youngest artist with a #1 debut at Country radio in over two decades. Adding to over 1 BILLION+ global streams, her top-streaming LP GOLDMINE includes the 4-week Hot AC #1 crossover version of “I Hope” feat. Charlie Puth – which earned the iHeartRadio Titanium Award for reaching over 1 BILLION radio spins and was named one of Rolling Stone‘s best Pop and Country collaborations of 2020 – alongside her PLATINUM three-week #1 single, “The Good Ones.”

Named ACM’s 2021 New Male Artist of the Year, and signed to BBR Music Group’s Stoney Creek Records, Jimmie Allen has already made history as the first black artist to launch a career with two consecutive No. 1 hits on country radio – the first being his debut single “Best Shot” – which claimed the No. 1 spot for three weeks – and second being his latest single “Make Me Want To” off his debut album Mercury Lane, released fall 2018. Named in tribute to the street he grew up on and the origin of his incredible journey, Mercury Lane features a cutting-edge mix of country, rock, R&B, and pop that draws upon the influence of his family and small-town upbringing of the critically-acclaimed rising star. Rolling Stone raved Allen’s debut “challenges the narrowly defined model of what constitutes a next big thing in country music in 2018” and The New York Times dubbed it one of 2018’s strongest, calling it “a conventional country album, filled with songs about the small details.” Jimmie’s most recent single “This Is Us” features Noah Cyrus and marks Allen’s fastest consuming single, with 30 million streams to date. His latest project Bettie James, released in July 2020, is a star-studded collaboration EP featuring Brad Paisley, Charley Pride, Darius Rucker, Mickey Guyton, Nelly, Cyrus, The Oak Ridge Boys, Rita Wilson, Tauren Wells & Tim McGraw. Wanting to weave his late father and late grandmother’s legacies into his music, Jimmie named the project after them, with each featured artist on the project having touched their respective lives through their own music. The result is a musical composition of love, heartbreak, perseverance, hope, and faith.