The Gold Spike and the Transcontinental Railroad 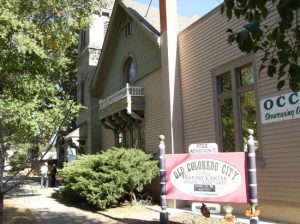 Celebrating 150 years of the Transcontinental Railroad and the Golden Spike that connected the East to the West.

Ken Valles will present his research on the transcontinental railroad in Colorado, utilizing displays that will include books, the Gold Spike replica, HO scale train replicas, and posters, among other items.

In a celebration of 150 years of the transcontinental railroad he will exhibit pictures of the original Golden Spike Ceremony, in which Leland Stanford joined the rails of the Central Pacific and Union Pacific railroads–creating the First Transcontinental Railroad.

Ken Valles is an avid researcher, whose interests expand beyond the Golden Spike and include the Southwest, the old West and the Pacific Theater in World War II. He has presented to the Old Colorado Historical Society before, and OCCHS is delighted to welcome him back!

Tickets are $5 and may be purchased at the door.

Members of the Historical Society are free.

The front entrance to the History Center has a ramp for wheelchair access, and the program will be held on the main floor.

The front entrance to the History Center has a ramp for wheelchair access, and the program will be held on the main floor.