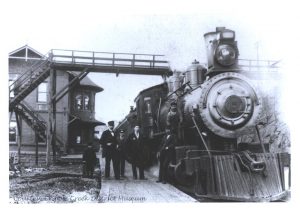 An educational, historical talk presented by the Cripple Creek District Museum about the Midland Railroad Tragedies.

The Colorado Midland Railway was the first standard gauge line into the Colorado Rockies.  At its peak it was 261 miles long and had two branches. The route began in Colorado City, went on to Leadville and then crossing through the Continental Divide via the Hagerman Tunnel it continued on to Basalt and terminated at New Castle, Colorado.

The first contract for construction was awarded on April 6, 1886. The construction in Colorado Springs started in July of 1886 with 3000 men spread between Colorado City and Buena Vista. Eight months later, the track was completed to Woodland Park and made it to Florissant on March 23, 1887.

In Lake George, the tracks through the 11 Mile Canyon weren’t completed until about June and then continued on to Buena Vista, reaching that point in July. Eleven Mile Canyon was the deadliest stretch of the Midland in El Paso, Park and Teller Counties. “Midland Railroad Tragedies” will address some of those many accidents in our area.

Steve Plutt, local historian, will present an interesting program on this piece of Teller County history at the Cripple Creek District Museum’s February Visits with History talk. Steve has long lived in the shadow of Pikes Peak, having grown up ​​in the Woodland Park area. Steve now resides near Lake George.​

The Cripple Creek District Museum invites you to learn more about the Midland Railroad and the tragedies which befell the line at the CCDM history talk.

This program is presented as a public service of the Cripple Creek District Museum in partnership with the City of Cripple Creek.

Refreshments will be served.

Seating is limited so reservations are required. Call the number below to make reservations.