'Daphnis and Chloe In My Studio' 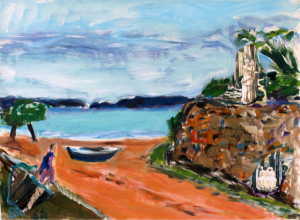 G44 Gallery is proud to exhibit Betty Ross and her exhibit, ‘Daphnis and Chloe In My Studio.’

Born in Romania to American parents, she grew up on the east coast. She received her B.A. from Radcliffe College where courses in art history led to a reviewer’s job with Art News, and curatorial work at the Yale Art Gallery.

She began oil painting with Robert Jones in Seattle and Kaldis in Greece. Moving to Berkeley she pursued graduate work in Art History, finally taking a M.A. in Theater during the convulsion of the Vietnam War. She painted in both watercolor and acrylic after moving to Colorado.

She found two residencies at the Vermont Studio Center helpful as Michael Goldberg encouraged abstraction and color. She received a National Endowment for the Art New Forms Regional Initiative Grant to travel to Romania and explore gypsy/artist connections.

Ross has exhibited widely and won awards in Colorado, the Rocky Mountain Region and the Midwest. She has been an affiliate member of Soho20 in New York, and Spark in Denver, and is included in numerous corporate and private collections. She worked also as a costume designer for TheatreWorks at the University of Colorado Colorado Springs, which she helped found with her late husband, Murray Ross.

The series are based on a gouache of a Daphnis and Chloe backdrop by an obscure Russian painter from the 1930’s that I saved from my mother’s paintings for many years, not knowing whether I would keep it or not.

It lived in my studio storage and one day it came to life and tantalized me; I couldn’t discover who the painter was, but felt it was a pastoral scene for the ballet, music by Debussy, and began to appreciate its delicacy and charm.

I was able to copy the image because it was unframed and decided to tear it up at first randomly and apply it to works on paper I had already been exploring, quite abstract and gestural, to enliven them. Sheep, rocky landscape, trees, a huddle of Muses, and the God Pan took their places.

Then I read the famous pastoral novel by Longus, from the second century BC, about two star-crossed lovers who finally are united, with the help of Pan and the Muses, and I wanted to give the story a more pictorial layer. So I relied on my photographs of Palmer Park, my personal pastoral place, and later, from mythical Messenia, Greece. which I had recently visited.

And elements of the story informed my paintings more closely, until the final celebration in the olive grove from Greece. The process involved my own discoveries and need for a layered imagining, as well as my enjoyment of the playful and fantastic story of Daphnis and Chloe, orphan shepherds of noble birth. I think collage is my favorite medium. 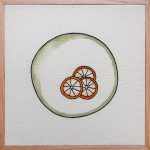 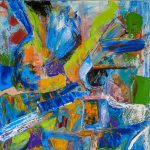 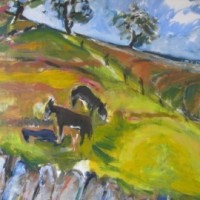